skip to main | skip to sidebar

Closing in a Week!

I'm sorry I've been MIA but life has been a little crazy lately. I am closing on a new house in a week. So, no time for crafts as I've been busy packing for months (or at least it feels that way). Here's the new place: 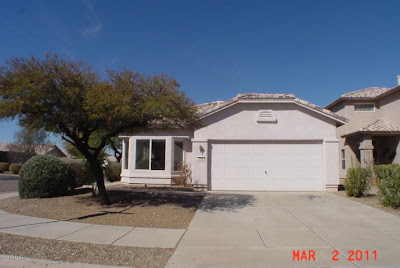 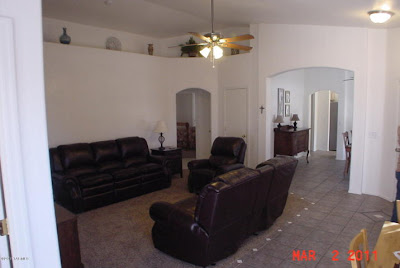 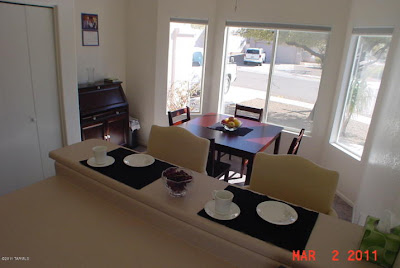 I am so excited! After living "in the boonies" for 14 years I'm looking forward to living closer to civilization. Only a mile to the grocery store instead of 20+ miles!
Posted by Jane at 5:34 PM No comments:

I was in charge of helping to come up with a craft project for our crafting group to do for Christmas. These little M&M tubes are what I came up with. I used the 1x8 clear envelopes that my secret pal sent me. The stamp is from Stampin Up. 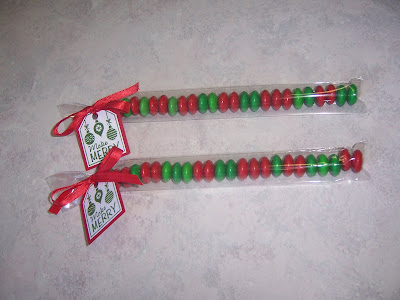 Aren't they adorable? Never mind they lasted about 2 seconds after I came in the door...my son at them and I didn't realize it till I found the tags on the floor. Sigh. :-)
Posted by Jane at 3:18 PM No comments:

Labels: other than a card, Stampin' Up

I found a pattern for these adorable bags in a quilting magazine that I picked up at Joann's. It claimed to be a 'quick and easy' pattern. 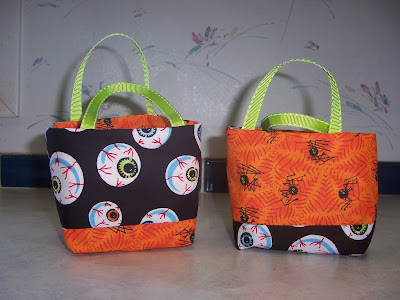 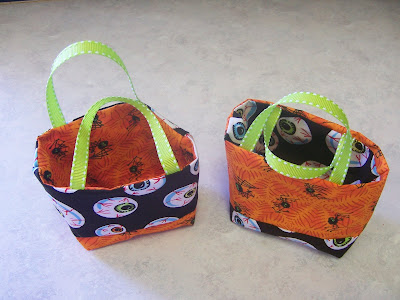 Well, the first bag took me the better part of 2 hours. Mainly because I just didn't quite get how it all worked. Bags are NOT my thing. But once I got one finished, the rest were pretty quick and easy. I have it down to about 15 minutes per bag. Which is reasonable. And so far, I've made 12 of these. The kids want to take them to their teachers. And I have a few that need to go to friends/secret sisters.

I am HOPING to dig out some halloween stamps and add tags to the bags. But right now my stamping table is surrounded by boxes of bedroom furniture. So I can't even get to it. Sigh.
Posted by Jane at 10:40 AM No comments:

Sorry, my life is absolutely crazy these days.

I am working two jobs and just started back to school for my Master's Degree. I am also looking at buying a house and moving in the near future. So, to say cardmaking is the last thing on my mind right now would be pretty accurate.

I am clearing out some supplies. If you need a CTMH Eyelet Case and Eyelets or a shoebox full of prismacolor pencils...let me know and we can play a round of 'make a deal'. I also have stamp sets, single stamps, etc that are looking for new homes. Maybe I should do a posting of just stuff for sale here in the future. In the meantime, if you know you are looking for something in particular...let me know.

And on other fronts...this is what I did tonight when I SHOULD have been doing school work. :-) 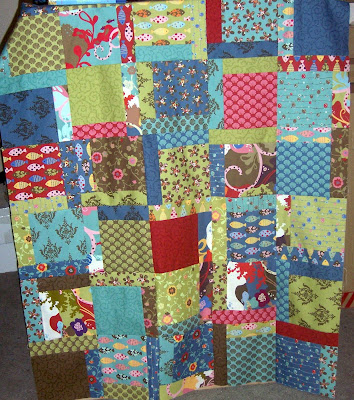 I won what I thought was a 'layer cake' at the last quilting retreat. A layer cake is a package of 40 10 inch precut squares in fabrics that coordinate. Turns out my package only contained 30 squares. So my finished quilt is a little smaller (44x55) but it will still work as a lap quilt. Or I could add borders if I want it bigger. What's funny is that I now have three quilt fronts here that are finished and I've yet to have any of them quilted. Guess I should do that at some point, eh?

Just got back from a 12 day trip to Idaho. It was so nice to get away from the heat for a bit. Hard to believe that I needed a light blanket to sit outside in the evenings. It was about 5,000 ft elevation where I was most of the time. The second day we took the kids and the dogs and went to this lake. It was gorgeous. The water was a wee bit cold but the kids still went in and played. 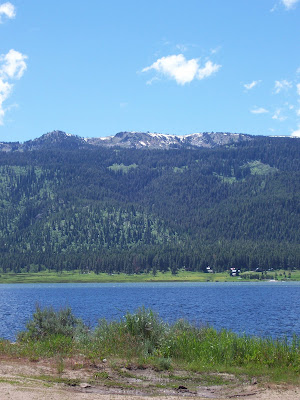 Then we helped with a petting zoo for my cousin's scout troop and my oldest son rode on the scout float in the 4th of July parade. My youngest stayed with me and collected candy. I have NEVER seen a parade where they threw out that much candy. I bet my purse weighed 20 pounds (not kidding) AND he got a t-shirt that someone threw.

We spent one day at a hot spring where the kids (once again) got to swim. I was expecting something more like a rock hole with warm water flowing into it...but this was actually like a swimming pool. It just pulled it's water from a hot spring.

Then we went camping at about 7,000 ft elevation. Brrr. Only bad thing was the stupid mosquitos that were everywhere. I swear they were as big as flies! We were planning on staying for two nights but cut it short because they were SO bad. 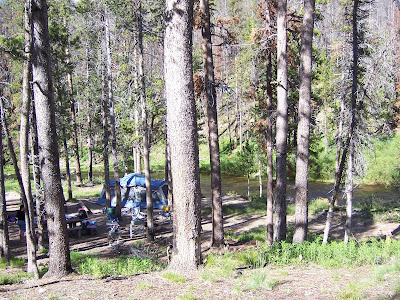 Then the last two days I stayed with another cousin in Boise (a little warmer there) and we went to a couple quilt shops which was fun.

This is my favorite picture from the trip...because it was totally unscripted. I love it when they play nice with each other! 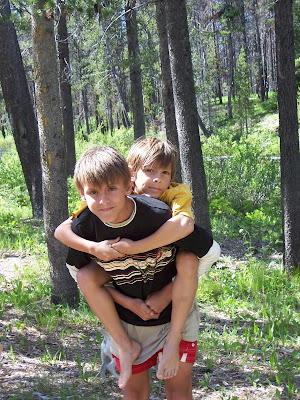 Now I'm back into the thick of things getting oldest DS ready for middle school, my youngest's birthday is this week, and I have to have everything ready for my MBA application by the 19th. All while working two jobs. Yikes! ;-P
Posted by Jane at 7:27 PM 1 comment:

I still need to do the binding...but my table topper has been basted and quilted. I'm pretty happy with how it's coming along. It's certainly not perfect but once it's on a table and a centerpiece or something is sitting on it...I don't think you'll notice the mistakes. :-)

Now I am trying to decide on a backing fabric. Here is part of the table runner, layed on top of the two fabrics with a little of the binding fabric showing at the top of the runner so you can take that into account as well. Thoughts/opinions? The one on the left is less busy and has dark and light browns in in. The one on the right has different browns/reds but is busy and is very 'fall leafy' and most of the fabrics on the runner are floral with leaves that aren't similar.
Posted by Jane at 9:10 AM 1 comment: 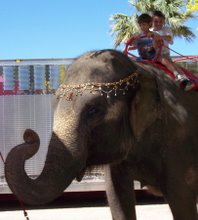 The boys riding an elephant at the county fair 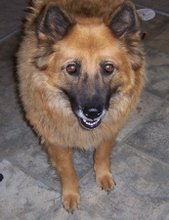 One of my fur babies. 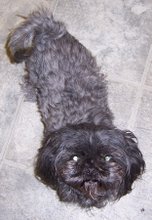 My other fur baby 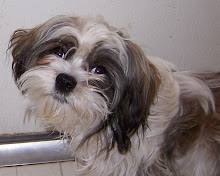 Jane
My name is Jane and I'm a stamp-a-holic. I am a mom (of two handsome boys on earth and two beautiful girls in heaven) and for a living I am an Analyst in the Healthcare field.